Since cheap drones are accessible to anyone and can be used for arbitrary purposes, nowadays the continuous monitoring of the airspace and its protection in case of necessity are much more than the military operations and the everyday surveillance of civil aviation. Because of the risks caused by the drones, the separate protection of the airspace of practically every outdoor public mass gathering has become necessary, whether it is a sport, political or cultural event. 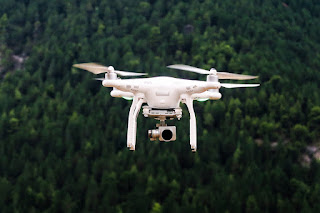 Although there are many current methods of catching, destroying drones or just of making them dysfunctional, none of the current methods can provide perfect protection. For example, the range of the guns shooting movement-interfering nets is minimal, and the opportunities of drones carrying catching-nets are also limited by the size and weight of the drone to be caught. The jamming of the radio signals does not restrict the visual field tracking based on pre-set parameters. In addition, laser weapon systems are expensive and their efficiency depends on the weather, not to mention that a slow drone can easily pull a curtain of smoke around it to scattering the laser beams.

Because of these things, the development of such a device would be worth, which could provide efficient protection in any situation by combining the existing methods. This new type drone-catching device would be a special, smaller variant of the BGM-109 Tomahawk subsonic cruise missile.

The drone catching variant of the Tomahawk cruise missile would be constructed with a shorter fuselage and of course it would not carry any explosives. As a result of this, its weight, engine performance and the capacity of its fuel tank can be smaller, which would minimize its range, but this device does not have to be able to fly hundreds of kilometers to its target.

The launch of these drone-catching cruise missiles would be carried out from a remote-controlled hybrid airship. This hybrid airship would carry the radar system responsible for monitoring the airspace and guiding the cruise missiles to their destination. In addition, its panoramic camera systems facing the surface of the Earth would also be able to carry out the visual identification and tracking of the drones.

The remote-controlled hybrid airship is an ideal platform for this purpose since it can hover in one place even for days above a public event, and its vision is not disturbed by landmarks.

This airship-shaped protective cover would not only provide the aerodynamic stability, so that the drone-catching cruise missile would remain able to fly, but it would prevent the captured drone from being able to drop anything. And the airship-shaped protective cover would be open on its nose and on its back, so that the air supply of the jet engine and with that the required speed to having enough buoyancy would remain provided.

Simplified diagram about the operation: 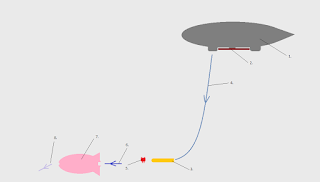 4. The cruise missile would be launched from the hybrid airship.

6. After the collision with the drone, the cruise missile would try to stabilize its flight altitude.

7. The drone-catching cruise missile with the already completely blown up airship-shaped protective cover.

8. The cruise missile would land as an airship.

(The first version of this concept was written in March 2018.)