A hybrid airship designed explicitly for freight transport can carry numberless things as its external load attached to the bottom of its structure, even the kitchen of a traditional Japanese restaurant. This kitchen transported by the hybrid airship would be a mobile building, therefore there is no need of rebuilding and refurnishing it upon the arrival and there is also no need of unforming it before the next transport. 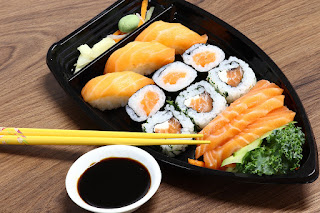 The kitchen could function almost immediately after placing it on the ground, and it would be the capacity to serve those interested in Japanese cuisine at large open-air events, like festivals that host tens of thousands of visitors.
At the locations of the events, the mobile kitchen transported by the hybrid airship would be placed where it can be attached to the local water, sewage and electric system.

Besides the mobile building of the restaurant kitchen, countless services vehicles would be required for putting the kitchen in operation and for the continuous cooking. These vehicles would be for example articulated trucks with refrigerated semi-trailers for foods and beverages, lorries for the storage of different consumables and other equipment, caravans for providing rest to the staff, and a truck with a containerized mobile water purification system.

The mobile kitchen would arrive on its own stands, which would be at least two meters high and would function as a frame. The height of these stands would be individually adjustable in order to compensate for the various heights of the ground.

At the event venues, a high-capacity dining tent would be installed next to the mobile kitchen, but the uniqueness of this globe-trotting Japanese restaurant would be that it could cover a venue with an area of multiple square kilometers by transporting food via drones.

Further functions of the hybrid airship:

The hybrid airship would not only function as a freighter, it would provide surface for advertisements as well. Its fuselage would be decorated with the national symbols of Japan, for example with the national flag, and it would advertise the restaurant with its name and its mascot at the same time.

The free Wi-Fi of the event venue provided by the hybrid airship would not only create a further place for advertisements, but at the same time it would provide the possibility of food order from the whole area of the event venue. Furthermore, it would also provide the communication system for controlling the drones (e.g. quadcopters) used for delivering the food.

These vending machines would be equipped with robotic arms capable of grabbing and moving the standardized delivery boxes between a landed drone and the storage lockers.

Every vending machine would have an individual identification number that could be recognized from a large distance, thus the food ordering could be done by smartphones from the whole area of the venue, requesting the delivery to a given vending machine.

With the help of the touch-screens on the sides of the vending machines, even video calls with the restaurant would be possible, and there would always be an expert on duty, who could solve any malfunction even if going to a vending machine is required.

The drones used for food transport would be powered by electricity, and there would be a sufficient amount of them to provide a prompt service in spite of the drones’ continuous need of charge.

The mobile kitchen of the Japanese restaurant could have large size and significant amount of capacity because of the possibility of hybrid airship transport. As a result of this, it could meet the needs of the visitors even at the largest open-air events, making them familiar with the flavours of the high quality Japanese cuisine.

Furthermore, the mobile kitchen is not only for different open-air events. It could be also placed in smaller or even in larger cities, where the vending machines could be placed in the most visited city parks and public squares. Pedestrian streets with cafes and restaurants are also visited by a lot of people, so that these would also be possible locations.