The easily accessible near-Earth asteroids have enormous economic potential, because they could create an unlimited source of key materials, ranging from titanium through platinum to gold. However, the possible processability and industrial usage of the material of the asteroids in space still requires a lot of research and development, so before setting up the asteroid mines, delivering the metal-containing asteroids onto the Earth’s surface would be worth. 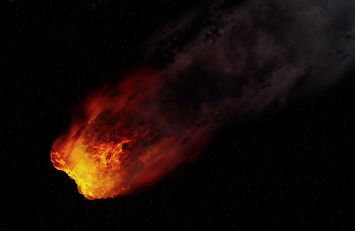 Because of this, in my opinion, an enormous, unoccupied piece of land should be marked on the Earth’s surface as a space range, into which these asteroids could slam.

The first step of the process would be choosing the appropriate near-Earth asteroids, those, which composition is ideal for economic aspects. After this, the selected asteroids would be redirected into a high Earth orbit by robot spacecrafts. The necessary technology would be based on NASA's Asteroid Redirect Mission, although there would be a different method of capturing the asteroids.

In order to minimize the risk of an accident while an asteroid is redirected onto a high Earth orbit or when it slams into the marked space range, a size- and speed limit would be determined regarding the available asteroids. A possible risk factor can be for example a miscalculated entry angle or the malfunction of the robot spacecraft.

This metal net would be lightweight and its structure would have only minimal load-bearing capacity, therefore, it would have no role in changing the trajectory of the asteroid. The metal net primary function would be providing the fixing of the robot spacecraft to the surface of the asteroid.

Arriving on the high Earth orbit, another robot spacecraft could land on the surface of the asteroid. The second robot spacecraft would carry a dozen smaller robot vehicles, which would practically be replicas in smaller sizes of the robot vehicle of the first robot spacecraft. That is, these would also be spider-legged rocket engines, only less powerful, but in addition, these would be able to spread an ablative heat shield material such as epoxy resin to the surface of the asteroid.

Once the ablative layer is complete, the role of the smaller robot vehicles would be to serve as maneuvering thrusters until the asteroid enters the Earth's atmosphere. In this way the atmosphere entry can be planned much more precisely.

It also allows that the robot vehicle of the first robot spacecraft would not be used for the trajectory change from high Earth orbit, but as a braking rocket. Thus, the asteroid could be decelerated as much as possible before entering the Earth's atmosphere.

Since only metal-containing asteroid would be captured, its strong structure and the heat-absorbing ablative layer should be enough to withstand the air friction, so the asteroid could impact into the Earth's surface in one piece in the area of the space range. With lower velocity the impact force of the asteroid will still be high, but to an acceptable extent, and the scattered pieces of the asteroid will also be easier to find and collect.
(The first version of this concept was written in March 2015.)
Email ThisBlogThis!Share to TwitterShare to FacebookShare to Pinterest
Newer Post Older Post Home
Airborne air defence - B-1H Lancer - Battlefield short text messaging system - Deployable observer and radio transmission drone - Firefighting airship - Gunslingers - Hoverbike Championship - Japanese globe-trotting restaurant - Liquid air carrying Skylon spaceplane - Made in Tibet - Military sensor kit - Ohi Hybrid Power Plant - PCI card to Nokia smartphones - Secured infrastructure for the print media - Self-driving range extender trailer - Space Range - Star Wars Championship - Tactical puck - Take-off supporting drone - The fate of the Iranian people - The marine depot of Fukushima - Tokyo International Food Court - Urban retail home delivery - Water supply of deep space missions