There are tens of thousands of indoor and outdoor shooting ranges in the world, where shooting is practiced on a wide range of targets, but I think it would be worth using smart targets to expand the training possibilities further. 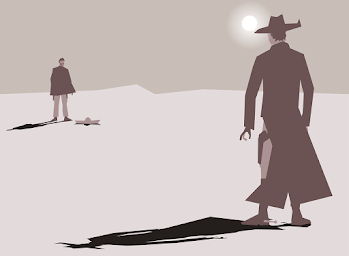 The Gunslingers would be a separate app that anyone could install on a smartphone. The app could connect to this smart target, making it possible to play a game in an Old West gunfight. The player must defeat ten gunslingers in the game, who would become more and more difficult opponents.

Simplified structural diagram of the smart target:
1. The structure of the smart target can be different sizes, but the most common size would be the human size. The frame of the smart target would not be bulletproof, because the players can only use rubber bullets.
2. Two pairs of light curtain sensors would be integrated into the frame, which sensitivity would be adjusted to the size of the projectiles. One of the sensor pairs would be vertically embedded, so when a projectile crosses one of the light beams, the height of the hit can be stated.

3. The other pair of sensors would be horizontally embedded, so the location of the hit can be precisely specified in millimeters from the data obtained by the two sensor pairs.

4. Pedestal for placement. If it is equipped on a remote controlled electric vehicle, which could always rotate the smart target in the direction of the shooter, it would be ideal training with moving targets.
5. Roof structure, which would also serve as a protection against weather in outdoor shooting ranges. 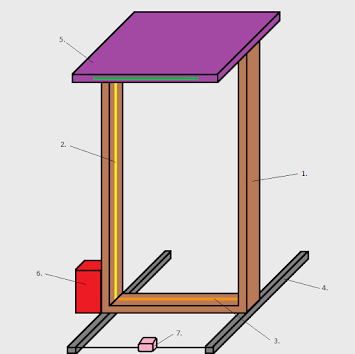 On the front of the roof a LED light line would be embedded which would be perfectly visible even in strong sunshine. This LED light line could help in many ways, for example, green light and red light to indicate whether the shooters could shoot freely or not.

Multiple types of traditional targets, such as paper, cardboard or even sheet metal could be attached to the smart target. For example, the metal rod of a paper roll could be attached to the bottom of the roof. So the targeting can also be done to the graphical targets, and a LED lamp would be embedded at the bottom of the roof to illuminate the attached traditional target. This LED lamp can light up in multiple colors, so if the shooters overcame a target, then it could also be signaled this way.

A communication device and a smartphone-sized computer would be integrated in the roof, which would be controlling the smart target, and would allow continuous data connection between the smart target and the player's own smartphone via Wi-Fi.

6. Emulator to imitate the shots of the opponent. The emulator would be a device that could be used only with blank cartridges, and for safety reasons it could only fire towards the ground. The simplest version of the emulator would use blank pistol cartridges, which could be loaded from a larger capacity magazine.

7. A high brightness rating projector capable of projecting an image or video on the traditional target attached to the smart target. Thus, a wide range of targets could be projected on a white paper or a white painted metal plate.

Operation of the smart target:

The projector would project the video of the current opponent onto a white cardboard, which is attached to the smart target. The player would stand face to face with the smart target and wait for the signal, which could be for example a bell sound, or the opponent's move when he reaches for his pistol. The signal would always come randomly, avoiding the possibility of cheating.

The app would calculate the hits caused by the virtual opponent, among other things, based on his skill level, and would report the results to the player. If the player wins in the gunfight, he could move on to the next, stronger opponent.

Thanks to the app's versatile development capabilities and the universal use of the smart target, the challenge for the players could be kept with continuously updated newer game modes and opponents.