At residential areas without an unlimited supply of water to extinguish fire, or at unoccupied areas without proper infrastructure, extinguishing extensive bush and forest fire is often an unsolvable task, because the opportunities of the delivery of the extinguishing material to the target location are always limited, independently of the number of the available tanker trucks or firefighting aircrafts. 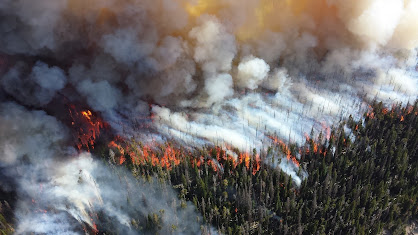 The modern version of the legendary, ocean liner-sized Graf Zeppelin filled with helium instead of hydrogen would also be capable of transporting extinguishing material, because its payload capacity is similar to firefighting aircrafts. However, because of its significantly lower airspeed, it would be able to carry out turns too slowly.

Nevertheless, the airships’ ability of hovering at one place makes the on-the-spot creation of the extinguishing material possible instead of transporting those to the fires.

This new type of firefighting airship, which could have the length of three hundred meters, would have the shape of a pipe instead of the shape of a cigar, so that continuous airflow would be possible through the air channel in the middle of the airship, which can be up to fifty meters wide. Since the airship does not need the ability to carry payload, and could be controlled only remotely with a ground-based controller, the structural design of the helium containing balloons is not so limited. Because of this, the pipe shape of the airship could be achieved by joining a dozen ring-shaped helium balloons.

Every ring-shaped helium balloon would have a separate pressure-proof container, in which some of the helium can be stored in compressed form. Because of this, the lifting power of the front and rear part of the airship could be altered independently and differently. Owing to this, when the airship is above the fire, it could change from horizontal flying to vertical flying without the continuous usage of the numerous external turboprop engines installed on the airship’s fuselage. Consequently, the fuel consumption of the airship can be minimalized, because the rotatable turboprop engines would only have to balance the power of the wind, keeping the airship at a given place.

In case of vertical flying, due to the differences in atmospheric pressure and temperature, like in a solar updraft tower, the air will flow in the air channel, which runs through in the fuselage of the airship along its length. This will make continuous energy production possible with one or more turbines installed in the air channel.

Although the efficiency of the energy production, compared to an almost one kilometer high solar tower equipped with a greenhouse, would be only a fraction, but the produced energy would be enough to make water from the air with a high performance atmospheric water generator. Implicitly, the airship would use the continuously produced water to extinguish fire, releasing that as rain above the fire.