The tactical puck would be a hockey puck size explosive device, which could be used with a radio remote control device, and would be ideal for neutralizing door locks and blasting a larger hole into a door, through which a stun grenade could be easily thrown. Thus, it makes it easier to open the door, and entering the room can be safer. 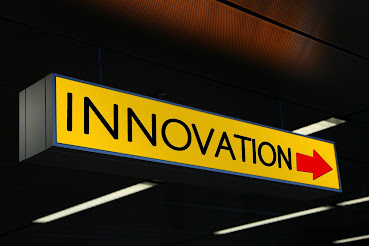 2. On top of the puck, a handle would be in the middle for the easier grasp.

4. Circuits that break when the cap is rotated and removed, and activate the RFID tag. 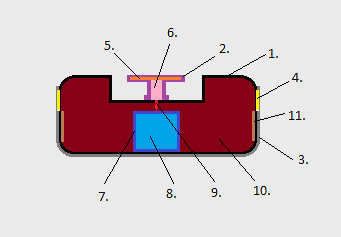 5. RFID tag, each puck would have its own unique code. This will ensure that only the selected pucks could be arming and exploding.

6. Igniter for the explosive.

7. A small pressure-resistant container for storing neutral gas. The container would be made of copper.

9. Firing pin with a tension spring for opening the pressure container, allowing the blending of the liquid explosive with the neutral gas.

11. Non pressure-proof membranes, a dozen on the perimeter of the puck. 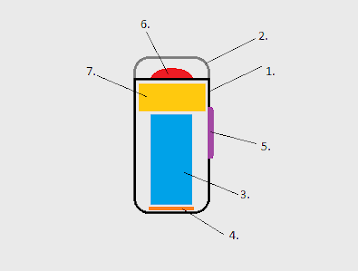 1. The radio remote control would be a small cylindrical device.

2. The top of the device would be an openable cap.

7. Radio with radius range of a few dozen meters.

Operation of the tactical puck:

To use the tactical puck, it first must be rotated and removed the cap on the puck bottom. This also activates the puck RFID tag. The removed cap is disposable. The bottom of the puck would be coated with an extremely fast grab glue, that is the puck should be placed immediately after the cap is removed.

Coming at the safe distance, the mode selector slide switch on the radio remote control device can be switched to detonate mode, and to open the cap, on the device the red button can now be pressed to explode the puck.

As a result of the radio signal provided by the radio remote control device, first the firing pin penetrates the wall of the nitrogen gas container, opening the container in the puck. As a result of the high-pressure nitrogen gas, the liquid explosive breaks through the membranes, and it’s ejected laterally and downwards from the puck. The liquid explosive would stick to the surfaces like napalm.

After a few seconds, before the puck is completely emptied, the igniter detonates the liquid explosive. Thereby, the explosion occurs in a thirty centimeters diameter circle.

More tactical puck could be used simultaneously, for example, placing them in door hinges.

Or if two or three pucks detonate on one another, with the greater hitting power they could blast a hole on a brick wall.

In another mode of use, the tactical puck can explode without the use of the nitrogen gas. With the copper-walled container the puck inner structure would be similar like the shaped charges, so that a puck would be able to penetrate a thick metal door, opening that with a smaller but focused explosion.

The tactical pucks would be easy to carry, easy to place, safe to use, and can be used in many ways, so these can be ideal for everyone from SWAT teams to counter-terrorist military units.

(The first version of this concept was written in May 2018.)