The Hoverbike Championship would be like Formula One in the air, the competitors would circulate on a designated track, and there would also be pit stops, where kerosene and liquid oxygen could be refilled. In the Hoverbike Championship, the different aircraft manufacturers, like Boeing, Airbus, Lockheed Martin, etc. could start their own racing team and hoverbikes, and like in Formula One, there would be predetermined rules for the hoverbikes’ development. 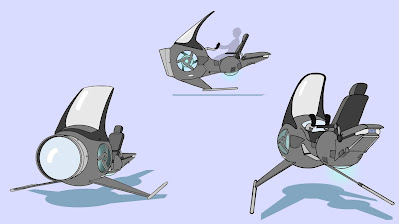 The hoverbikes would fly at the same altitude during the race, and only two or three meters high, which their fly-by-wire system would automatically hold, so competitors could only overtake each other from the side. And hoverbikes would not have a rear main jet engine, so their maximum speed would be low, at most half that of a Formula One racing car.

Simplified structural diagram from top view:
1. Fuselage. The hoverbike would be a small and lightweight aircraft.
2. One-person cockpit.
3. Compressor for air compression. Since the compressor sucks in the air from above, it will not suck up the dust and stones from the ground.
4. A second, counter-rotating compressor. Both compressors would be rotated by electric motors, and each compressor would have an air distribution device, that would convey the high pressure compressed air to the engines in equal proportions. Each compressor would provide air to four engines.
5. Jet engine without compressor. The hoverbike would have eight separate engines.
6. Articulated structure for directing the engine. With this structure the engine could swing from the horizontal position to a nearly vertical position in all directions, so the power of the engines can be used simultaneously to maintain the hover and maneuvering of the hoverbike. A fly-by-wire system would control all eight engines separately. 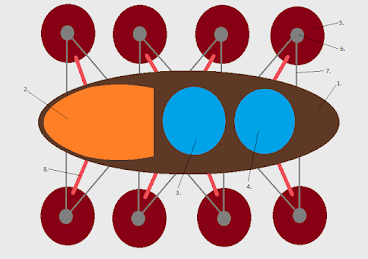 7. Structure for fixation of the engine to the fuselage.
8. Flexible feed pipe for the engine. The hoverbike would also have a cryogenic liquid oxygen tank, so the feed pipe would supply the engine with high pressure compressed air, kerosene and liquid oxygen. Since the hoverbike wouldn’t have wings, instead, it would use the power of the engines for every maneuver, by supplying liquid oxygen and extra kerosene needed, the power of each of the eight engines could be changed separately from moment to moment, which can provide extraordinary maneuverability for the hoverbike.

Simplified structural diagram about the jet engine:
1. Since the compressor would be separated from the engine, the structure of the engine could be wider but shorter compared to a conventional jet engine.
2. The articulated structure.
3. Combustion chamber.
4. Exhaust.
5. Turbine.
6. Generator. Each turbine of the eight engines would be connected to an own, separate generator, which would provide the necessary energy for the electric motors of the compressors. Although the eight generators of the engines and the two electric motors of the compressors would significantly increase the weight of the hoverbike, thereby the airflow for air supply of the engines can be steady regardless of the maneuvering of the hoverbike. 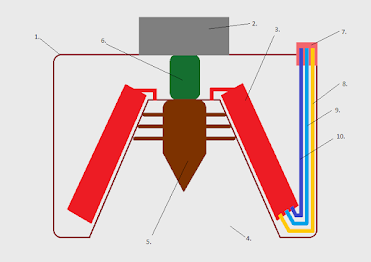 Safety solutions for the jet engines:

As in Formula One, each engine would be secured with one or two chains to the fuselage of the hoverbike, preventing them falling off by an accident.

Each engine would be completely covered by a metal net frame, including the bottom of the exhaust, which frame would be strong enough to catch the blades that could fly apart from the turbine in case of a collision with another hoverbike.

Because the turbine does not rotate a compressor in the engines, but a generator, each generator can be equipped with a strong emergency brake that stops the rotation of both the generator and the turbine in case of an accident.

Benefits of the Hoverbike Championship:

The air travel is continuously evolving and expanding from traditional aircrafts to electric air taxis, but unlike cars, due to much higher power demand for the fully electric operation allows only very limited capacity and range, so the conventional kerosene-consuming aircrafts will not have a real electric alternative even in decades.