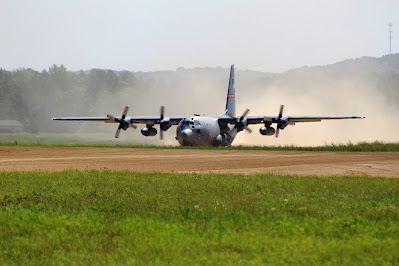 The take-off supporting drone would be a convertiplane powered by electricity and it would be as big as an external fuel tank. Instead of the rotation of the conventionally structured power engines located at the wing-tips, in this case the whole drone itself would swing to change between airplane and helicopter mode.

The drone would be developed explicitly to the usage of the universal pylon installable under the wing of the C-130 Hercules military transport plane, so before take-off two drones could be installed onto a C-130, so that the rotor blades of the drones’ coaxial rotors would be positioned on the sides of the wings’ trailing edges in contrast with the C-130’s own propellers.

There would not be a regulating lever on the control panel of the C-130’s cockpit to change the power-output of the drones, but similarly to petrol-electric hybrid cars, the drones’ power-output would automatically adjust to the output changes of the C-130’s turboprop engines. So, before take-off, pilots only had to activate standby mode of the drones. During take-off and reaching the cruising altitude, the operation of the drones would be controlled by the onboard flight control computer.

The drones require low maintenance thanks to the electric engines powered by batteries. Moreover, the maintenance of the drones and the recharge of the batteries is manageable even in battlefield conditions. As a result of this, drones could not only support C-130s taking-off from conventional airports’ runways, but also C-130s taking-off from unprepared runways. Furthermore, the take-off would be more safe thanks to the additional power-output of the drones.

Based on the experience gained during the military usage, the usage of drones can be extended to civil aviation, since the turboprop passenger and cargo planes similar to the ATR 72 fly really short distances. Because of this, the fuel-consumption during take-off and reaching the cruising altitude has a really significant impact on the operating costs.
(The first version of this concept was written in August 2018.)