The B-1H version would be a heavily modified B-1B Lancer strategic bomber, which would be specifically designed for carrying out high-risk missions against fortified underground facilities. The B-1H would use hydrogen as fuel instead of kerosene. 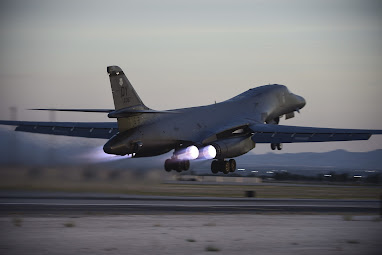 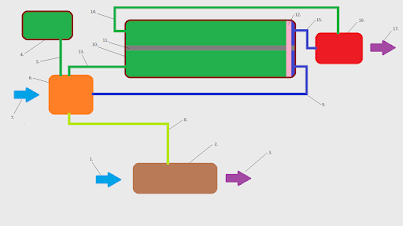 Simplified example of a mission:

As for the take-off, both primary and secondary cryogenic storage tanks would only be filled with liquid hydrogen.  The B-1H would take-off in a traditional way by using jet engines powered by hydrogen gas.

Thanks to the creation of liquid air during the flight and the joint use of the primary cryogenic storage tank, a rocket engine can be used without any excess weight required by the storage of liquid oxygen.

On the way, by reaching the target, the B-1H would release a bunker buster (MOP) bomb. Thanks to the higher speed and flight altitude the bomb can hit the ground with greater force.

The benefits of the B-1H Lancer:

The first thing that long-range aircrafts from the SR-71 to the B-1B Lancer do on a mission is the air refueling. This is not possible with liquid hydrogen. With the excess weight of the heat exchanger, the rocket engine, and the cryogenic storage tanks, and without the possibility of air refueling, the armament capacity of the B-1H would be much less than of the conventional B-1B Lancer, but it would still be enough to fulfill wide variety of tasks, and the much higher flight altitude holds many possibilities.

For example, contrary to the F-15, the B-1H could launch a much larger and much heavier missile from a higher altitude, where atmospheric friction is less significant. This would also allow the launch of a smarter anti-satellite missile that does not destroy the targeted satellite on a kinetic basis and creating debris, but put a small interceptor satellite on the same orbit, which could blow it off the targeted satellite with an instant curing foam sealant that closes the maneuvering nozzles and darkens the optics.

Flying at higher altitude, where the oxygen is not enough for the conventional jet engines, interceptor aircrafts such as the MIG-31 are dangerous just because of their air-to-air missiles. However, due to the minimal humidity of the rarer atmosphere, the capabilities of a defensive weapon such as the ATHENA Laser Weapon System are also multiplied.